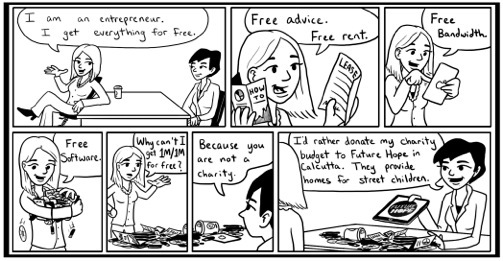 The Internet is full of people who expect that everything should be FREE. In Economics, this phenomenon is referred to as the Free Rider Problem: when people consume value without paying their fair share. Obviously, some people DO pay their fair share. This makes the ‘free riders’ take advantage of those who pay, making the whole equation unsustainable in the long run. Creating value is expensive. Capitalism assumes that value gets created with the understanding that those who consume that value are going to pay for it. If that assumption is violated, the system, eventually, collapses.

If you are an Internet or Mobile entrepreneur in the twenty-first century, chances are you are, somehow or the other, being affected by this challenge. The Media industry, in particular, has dug itself a gigantic hole and climbed straight into it by offering content for free. Now, the apocalypse has set in. The industry is doomed to oblivion for the most part.

The Education industry, with MOOCs, had started going down that path, but at least is pausing to think, thank heavens!

Why do you think this is the case?

Because, developers are confusing ‘customer’ and ‘free user’. A free user is not a customer. Your goal is to get paying customers, not just free users.

If you have a product that customers don’t want to pay for, but they want to use for free, then you don’t have a business.

So, please be careful about giving lots of value away for free if you want to be successful as a business.